All About Parachute Steering

All About Parachute Steering

Parachute steering has evolved a lot over the years. In the early days of skydiving, round parachutes were difficult to control and skydivers pretty much landed where they landed, with little ability to do anything about it.

Today, skydivers have complete control over their parachutes, steering them to change direction, reduce or increase downward speed and flattening the parachute wing to create longer flights. Find out more about parachute steering here:

The earliest skydivers used round parachutes. These are what it sounds like; circular in shape, pretty similar to what you'd probably imagine parachutes to be like. Remember those plastic soldier toys that came with parachutes? That's what we're talking about here. 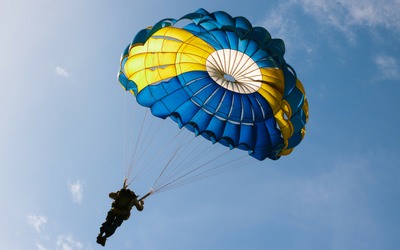 Round parachutes were great because they were very reliable. They rarely malfunctioned and they were also incredibly docile. They were perfect for less experienced jumpers and also ideal for the military because they could carry heavy weights (when the soldiers were carrying equipment, for example).

But they also had their setbacks. The main setback being the lack of ability to steer round parachutes. Not ideal when you want to have control over where you're flying and where you land!

They could basically only be steered by pivoting around their center point. Round parachute pilots could choose the direction in which they faced and, to a small extent, this affected the direction of flight - but round parachutes didn't get much forward movement anyway. They were ace at the time but ask any modern skydiver if they fancy jumping a round, and you'll get a resounding "No!" from almost all of them!

The Introduction of Round Parachutes

Ram air parachutes were first introduced in the late 1970s, having been designed by Domina Jalbert in the 1960s.

Unlike the single layer round parachutes, ram air parachutes are made of two layers of material which is split into 'cells', each of which is closed off at the back of the parachute but open at the front, allowing air to be 'rammed' in through the front (hence the name).

Ram air parachutes are much more like a wing. Exactly the same principles apply to ram air parachutes (also known as 'square' parachutes, due to their squared off corners) as an airplane wing. The shape of the parachute means that air moves faster under it than over it, which creates lift. And ta-da, we're flying!

So let's get into how we actually fly these wings!

Imagine the 'square' parachute (it's actually a big rectangle). The front has the openings we talked about, where air is 'rammed' in, creating a solid aerofoil. The parachute is attached to its pilot by 'lines' (heavy duty 'strings') and those lines are distributed across the parachute. 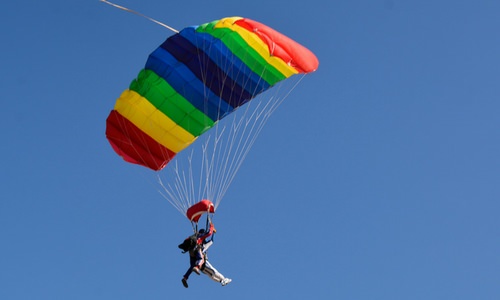 By pulling down on the right toggle, we pinch the right corner of the parachute down and this makes it turn to the right. Simple, huh? Pull down on the left one and - you guessed it - we turn left!

That's parachute steering in its simplest form. Another really important function of the toggles is to 'flare' the parachute. This means pulling down on both toggles at the same time, pulling the whole back edge of the parachute down, and this slows the parachute's descent and means we can make those soft landings you'll see at the drop zone.

Turning and flaring are both really important. If we can turn, we can control where our parachute goes. That's awesome - no more accidental landings in fields of cows for us! If we can flare, we can make nice soft landings and keep ourselves safe.

As skydivers progress, they learn how to have even more control over their parachutes. One thing we can do is use our toggles and the 'risers' (the webbing that connects the harness to the lines) to extend the flight of our parachutes. This means that if we're further away from the landing area than we anticipated, we can easily make our parachutes stay up for longer and therefore get ourselves back to where we need to be.

We also learn about using our steering inputs to get us out of potential trouble. Skydivers are a social bunch and we like to jump together, but this means we're in the sky together and flying our parachutes near to one another - which has its potential issues. Luckily, we can steer our parachutes and if it looks like we might be getting too close (or even likely to crash) we can pull down on our risers or toggles to avoid each other. We even agree in our training that everyone in this situation turns right, which means we avoid both turning into each other.

Swooping is the practice of using the parachute controls to force a much faster descent rate through turning. The result? A really cool noise as we come in quickly across the ground to land. Chicks, it turns out, totally dig swoopers!

That's not all though; swooping is a competitive sport in itself and people compete to fly the longest distance across the ground, to make the most accurate landing and more.

Swooping is a very advanced skill, because it involves putting your parachute into faster turns and higher performance landings. We don't teach new people to swoop (in fact, most swoopers make hundreds of jumps before they start) because they need to be able to keep themselves safe.

Parachute Steering On a Tandem Skydive

If you're coming to make a tandem skydive with us (where you're attached to one of our highly experienced instructors - usually best for first timers), you won't miss out on parachute steering!

If the conditions are right, your tandem skydiving instructor will give you a turn at holding the toggles and pulling down on them to steer. It's an awesome experience!

If you're ready to try skydiving, find out more about our tandem skydiving jumps here.

Thanks, again, and see you soon!