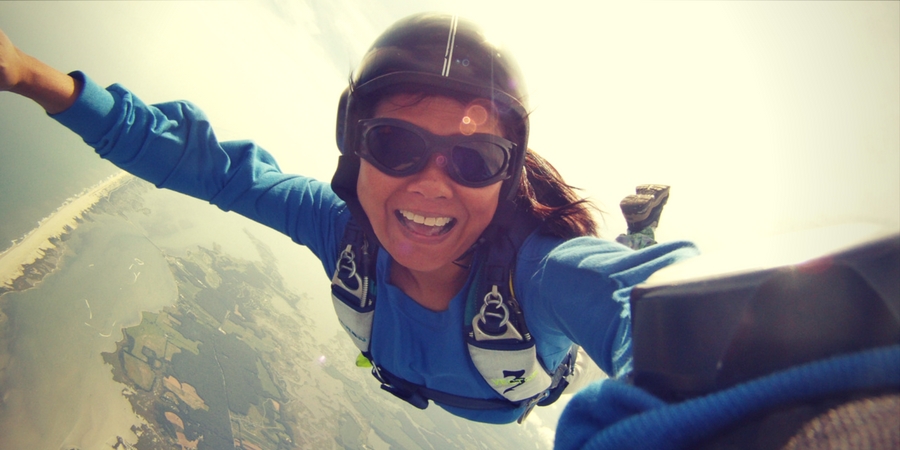 A Date With Destiny at 10,000 Feet with Skydive OC Owner, Jeanice Dolan 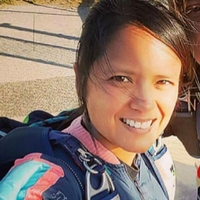 One thing is for sure: When Jeanice Dolan was skyrocketing to the top of the corporate ladder, she had no idea she was going to be taking a parachute down. Young, hungry and already on the rise (with a recent promotion to Assistant Controller), Jeanice was checking all the boxes a powerful, independent-minded woman should, and she was being groomed to keep up the brisk pace of her meteoric rise.

Jeanice was well into her 20's when she started to reevaluate her plan. Everything looked awesome on paper, but she felt lost. Trapped, perhaps.

"For so long, I had thought that was is it for the rest of my life," Jeanice explains, "I figured I was going to be traveling constantly on business, living out of hotels, not really being able to enjoy things I loved--even eating at home, for example. Eventually, I realized it just wasn't what I wanted--not forever, at least."

The answer came, as these things tend to do, during a well-deserved vacation.

"When I went on my first skydive, though, I did zero research," Jeanice laughs, "Which I would never recommend to my students--or my customers, for that matter. I really just bounded up to the dropzone and said, this looks likes fun, I'm gonna do it! And I did."

As casual as her approach might seem from her description, in truth it was anything but. First-time skydives are always, scary, but Jeanice's circumstances were quite a bit more nail-biting: Her doctor had warned her that a flubbed landing could have catastrophic circumstances, and for good reason. 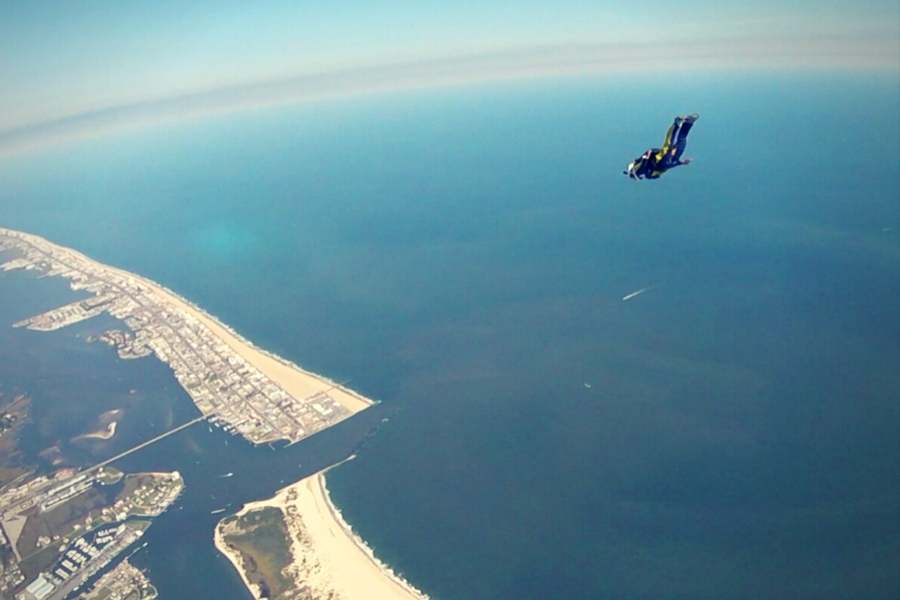 Jeanice Dolan skydives above the iconic views of her dropzone, Skydive Ocean City.

It started on the way home from a fishing trip with her dad and her uncle during the summer of '83. Jeanice was 11 years old.

Somewhere along the long car ride back to Baltimore, a drunk driver swerved over the centerline. The car the three were in took a head-on impact. The resulting impact shattered the upper shaft and ball of Jeanice's right femur and drove a large shard of glass into her right thigh. Her next seven hours were spent in emergency surgery at the shock trauma unit at Johns Hopkins. Those seven hours were to be the first of many, many hours under the knife over the course of many, many years.

Through the arduous process of Jeanice's recovery, the part of her femur that was shattered in the crash went necrotic. Such an eventuality indicates a hip replacement, but little Jeanice was too young to undergo the surgery. Instead, she pushed through middle school, high school and her first years of college with the pain and the extent of her immobility steadily increasing with time. Jeanice walked with a three-inch lift under her right foot and a severe limp. Her leg refused to rotate externally or allow her to bend at the waist by more than 30 degrees. Annual surgeries conspired to steal her summer vacations.

Jeanice underwent her first hip replacement at 21. The resultant gains in mobility made her feel comparatively unstoppable--but she still couldn't run, perform squats, or even scuttle around a tennis court. The accident had left her essentially unable to be an athlete. Then that skydive came along.

When Jeanice took off in the plane that first day, she had no idea what skydiving was going to do for her. When she landed, she ended up landing to a whole new Jeanice. After she had a chance to take it all in, everything seemed changed.

"I was bubbling over with emotion; with feelings I didn't expect," she explains. "When it had all processed, everything just fell into place. I knew what I had to do. So I went home from that vacation, walked into my boss' office and said, You know what? I'm going to take a little bit of a break. I'm going off for a while to skydive. I'll be back. Believe me, he tried really hard to convince me otherwise--but I never did come back." 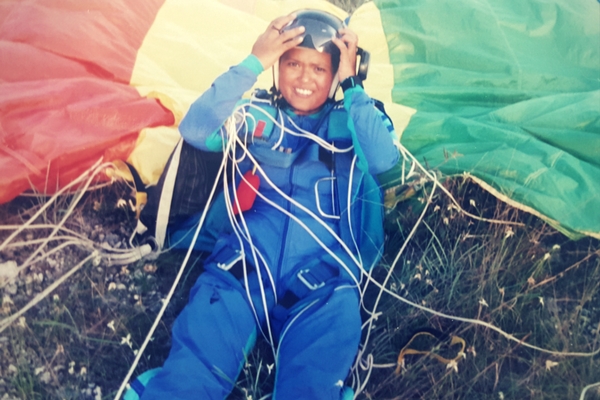 (left) Jeanice in her early 20's, smiles after one of her jumps learning to skydive.

Jeanice tackled the job of learning skydiving like she tackles everything else in life: in a big way. First, she headed off to complete her sport skydiving license ("AFF") in the Bahamas. From there, she moved straight to Florida--the biggest skydiving region in the United States--and settled down at the dropzone in Titusville.

Jeanice knuckled down and racked up the jump numbers, steadily earning her licenses. Soon, her uniquely intensive business experience--and the acumen that had gotten her so far--also brought to bear. Before long, she was running the dropzone's back office. She did so for about 4 years.

"I really got to know the skydiving industry at Titusville," she explains, "I ran the desk; I owned and operated the gear store. I watched the tandem instructors, packers, and manifesters work. I wrote the checks and knew every detail of the finances--what could be done and what shouldn't be done; what steps to take and what to step away from."

"An accounting major is, like, the number-one major to have if you want to be flexible," she laughs, "If you have one, you can run a business no matter what that business might be."

After she'd gotten some serious dropzone experience under her belt--and two kids had entered her life--the fates handed Jeanice another gold-plated challenge. She heard of a dropzone up for sale just next to the Technicolor shoreline of Ocean City, Maryland.

Jeanice knew Ocean City well--after all, it was the biggest resort town near Baltimore, where she grew up. Unlike the other dropzone towns she'd spend time in, Ocean City was central; exciting; full of restaurants and holidaymakers and diverse opportunities for fun; great for raising a healthy young family. The airport itself was a beauty, and the views from altitude were swoon-worthy.

In just three weeks, the papers were all signed. On May 4th, 2002, Skydive OC celebrated its opening day.

"I didn't actually really pick this dropzone," she smiles. "This dropzone picked me." 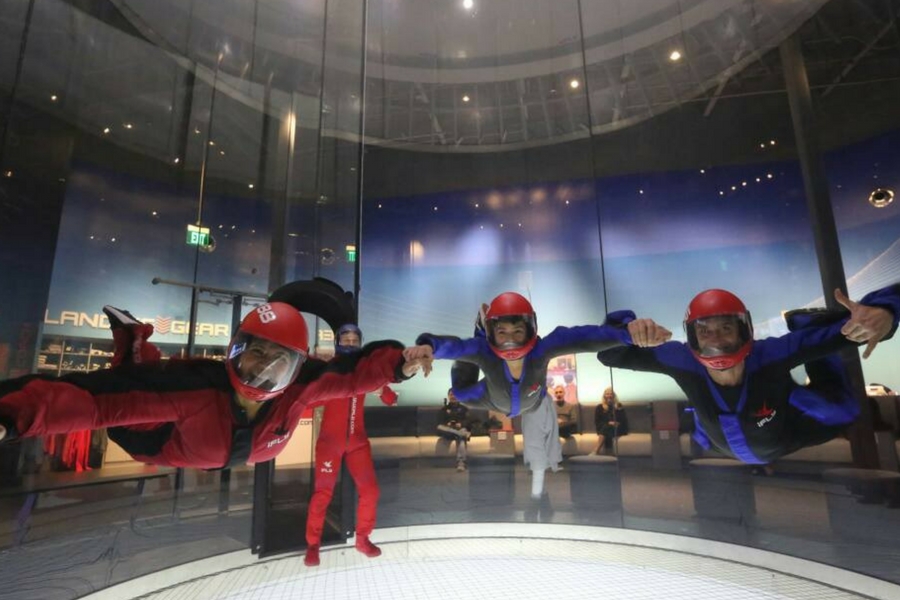 "My eldest, my daughter, is 15 now, just like the dropzone," Jeanice says. "She worked at manifest last year and she's going to come back again this year for sure, but I don't think she'll stay in the sport as a career. My son, however, who's 12--is a born skydiver, through and through. He's too young to work at the DZ, but he absolutely loves the wind tunnel. We go to Baltimore every Tuesday for his coaching. He's going his first competition in April."

"I actually got to fly with him for the first time last night," she beams. "That was really, really cool."

As it turns out, Jeanice's plans for the dropzone revolve around that kind of steady, incremental growth, with an emphasis on customer experience. It's paying off, too: Around 80% of the students and tandem jumpers at Skydive OC drive a full three hours to get to the dropzone--and it's so good that they keep coming back for more.

"I won't push for growth at the expense of the experience," Jeanice insists. "But I do strive to keep up-to-date with changes in the industry; with the smartest, most efficient ways to work. Safety goes without saying, but I also focus on making sure the accessory elements--like videos and pictures--are the best they can be."

"My staff is on board with the fact," she explains, "That our customers will remember their time here for the rest of their lives, even though my staff collectively jump hundreds of times a week. We do everything we can to make every one of those jumps the best experience possible."

That might sound like a tall order, but Jeanice only demands of her staff what she demands of herself. Tall orders, it seems, are the only orders she takes. She's been juggling a full-to-bursting life as mom/CPA/DZO for fifteen years, overseeing the myriad day-to-day operations of the drop zone as she shuttles her kids to after-school activities and takes calls from financial clients with red-alert issues.

"It's definitely, you know, in overdrive, seven days a week" she grins. "But my number-one hashtag is 'work hard, play hard.' It all gets put into perspective."

And, as often as she can, this secret superwoman still enjoys the perspective that started it all: the perspective from the open door of an airplane. For Jeanice, that makes the whole circus worth it.

This was a fantastic experience, we had an amazing time!