Tandem Skydiving Landings - What to Know

If you've landed on this page, it's likely you're giving tandem skydiving some serious consideration and now you're doing your research about tandem skydive landings and the physical requirements needed. If that describes you, you're in the right place as we're going to share everything you need to know about how to land while skydiving.

First things first - it's important to know that you and your tandem instructor will be operating as a team. You will be playing an important role in your safe return to the big ole earth down below. In other words, it won't be like riding a rollercoaster where you are a passenger at the mercy of a fast moving train. You will have responsibilities throughout the skydive to help with stability in freefall and of course with the landing. Your engagement enhances the experience and it's not something to feel intimidated about. Let's dig in starting with the landing.

One of the most important parts of the entire skydiving process is the final 30 seconds before landing. It's important to listen to the directions from your instructor, but you can be sure you'll be hearing this: "Legs up, legs up, legs up!!!"

Imagine a plane coming in for a landing - it's always important that the rear wheels touch down first followed by the nose wheel. When making a tandem skydive, you could say the instructors legs are the rear wheels and the students legs (you) is the nose wheel. If the student doesn't lift their legs up when landing then the proverbial nose wheel will land first making for a rough landing that could lead to a broken ankle or leg which is the number one cause for injury in skydiving. In the video below, notice the correct landing technique:

As you may notice from the video above, landing may not be what you imagined it to be and that's because of the kind of parachute commonly used within civilian skydiving. Notice that the parachute isn't round, but is actually rectangular. This rectangular design is known as a ram-air parachute. Essentially, a ram-air parachute is like a fixed wing which has a glide ratio that's much more forgiving than that of a round parachute. So fear not! Unless landing into a strong wind, you will not feel as if you're on an elevator coming straight down and at the mercy of the wind. Today's parachutes allow for much more control with greater steerability. Gone are the days of skydiving landings like what you see below:

Other Things To Know

Knowing how to land is important, but before you can land, you have to successfully exit the aircraft and of course freefall. You will have an active role to play in these sequences as well.

Once in the door of the aircraft, every fiber in your brain will be sending alert signals to your hands to grab onto something because willingly walking to the open door of a plane at 18,000 feet doesn't compute. To ensure a clean exit, you've got to do the opposite of what your brain is begging you to do. You need to cross your arms across your chest or hold onto your harness and get your chin up looking above the horizon. This body position will allow for a clean and stable exit. Once you've left the aircraft and become stable, the instructor will tap your shoulders signaling for you to uncross your arms and allow them to be extended in free fall. This action allows for more surface area during the free fall which adds to stability. 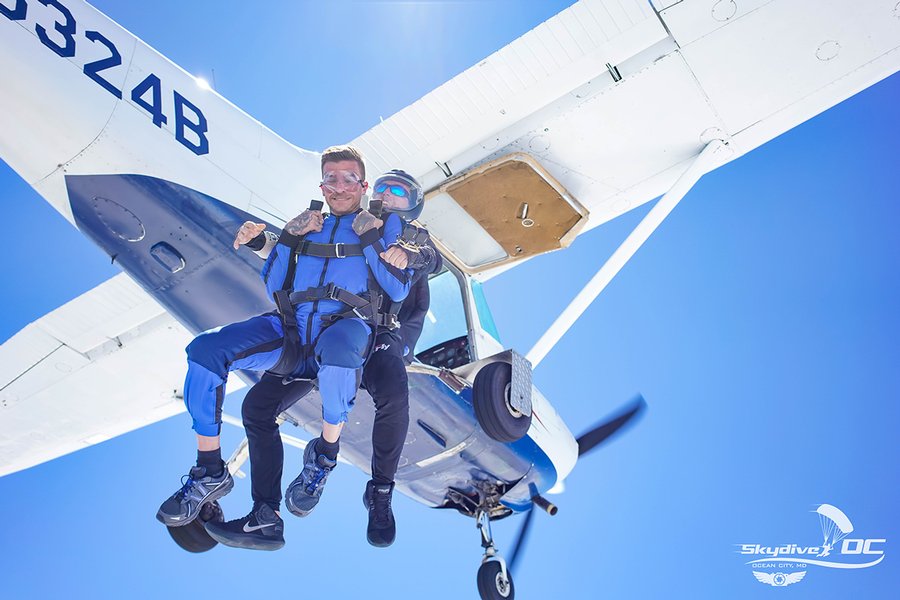 In 2019, United States Parachute Association members in the U.S. reported 2,522 skydiving injuries requiring a medical care facility. That's approximately 1 injury per 1,310 skydives and the majority of these injuries are a result of bad landings. While many people think the worst as it relates to skydiving, fatalities are a rare occurrence. In 2019, there were 15 recorded fatalities out of approximately 3.3 million jumps made in the US. Skydiving isn't free of risk and you can die participating in the activity, but an individual is far more likely to twist or break an ankle or leg due to poor landing technique as opposed to death. Of course the great majority of skydiving done today is uneventful.

A Summary of Skydiving Landings

We hope this article has provided you with some clarity on what you can expect when making a tandem skydive and what the landing sequence is like. Should you have any additional concerns or questions, please feel free to give us a call - we'd be happy to answer your questions!

The best Christmas present I could have asked for!